UPDATE: See the banner at the game here. 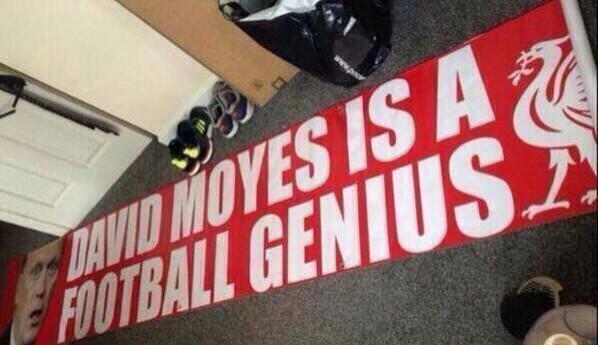 Liverpool fans have been giving a sneak preview of a banner they’ve prepared ahead of their meeting with Manchester United.

The old enemies face each other a week on Sunday, and with Liverpool towering above their north-west rivals for the first time in many seasons their supporters are planning to celebrate United boss David Moyes’ role in making it possible.

The banner declares: “David Moyes is a football genius.”

Liverpool look nailed-on to finish in the top-four this season, while United are set to miss out on Champions League qualification.

The Merseyside outfit clearly feel a power shift in their direction.

UPDATE: See the banner at the game here.

The Fight for Equal Pay in Sports: How it Began & Where it’s Going

Charity & NFL: Top 8 Footballers Giving Back to the Community