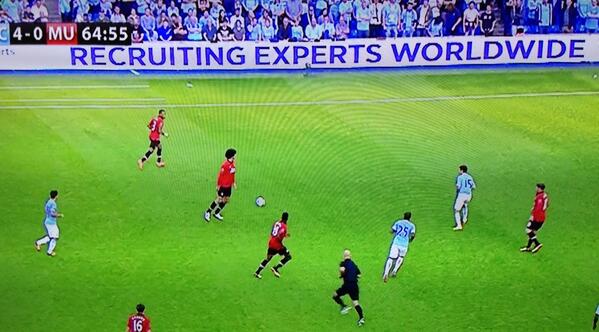 1. Manchester City gave a pretty big clue that they think their derby win over Manchester United was secured during the transfer window. Just look at the hoardings above.

3. Paolo Di Canio must be really good at projecting his voice. Not so good at keeping his job.

4. Stephane Sessegnon probably enjoyed his role as chief executioner. And who could blame him?

5. The spirit of Sir Alex Ferguson has deserted Manchester United and gone to Tottenham, who managed to grind out three points with an injury time winner.

6. Welcome to the Leighton Baines One-Man Goal Of The Season Contest hosted by West Ham.

7. Romelu Lukaku scored the ultimate KO winner for Everton. Heading a late goal against West Ham and being knocked out in the process. Conscious or not, he’s probably got Chelsea fans wondering whether he should be scoring for them instead.

8. Then again, the Blues go have the prolific John Obi Mikel at their disposal.

9. Somebody must have mentioned title challenge at Liverpool. The wheels came off against Southampton.

10. It’s going to be a topsy-turvy league when we’re now relying on Arsenal to provide consistency.